This story takes place in a town full of residential areas and apartment complexes. The town is what you would a commuter town, and is a nice, quiet refuge from the hustle and bustle of urban cities.

There are no skyscrapers to be found, nor any big-box stores. Instead the townscape is comprised of houses and apartments. It has a nice, relaxing ambience, and there's a certain nostalgia that fills Takeru's chest when he looks out his window at the two. The only tall buildings so to speak of are the buildings around the station, or the apartment towers along the redeveloped riverbank.

Here one doesn't need to look up to see the beautiful, blue sky. When the sun sets in the evening, the mountains in the distance, and the hill road leading up to school become tinged in a crimson hue. If you ever want to know what time it is, all you need to do is check the sun.

Our story begins in late September. The time of the year when an end to the blistering summer heat is finally within sight.

It was a normal day for Takeru. He was leisurely walking down the riverbank with his friends as he always does, just as the sun was about to set. It was all part of the same daily routine he was used to. But tiny changes can cause that daily walk home to change, in ways that may one day come to tell a story of love.

They were tiny indeed, nothing special. Just the small, daily happenings that we each experience in our daily lives.

Those tiny, minuscule moments that occur randomly throughout our daily lives can be the start of magical things to come.

"C'mon, just hand it over. I'll help you with that. We'll get it done faster with the both of us."

Takeru is the protagonist of our story. He's in his second year of high school, and serves as the chairman of the Election Committee.

He usually acts slaphappy, and being lazy is his forte. However, when it comes to other people, to someone who has some serious problems or trouble on their hands, he'll stop with the laughs and do everything he can to help. It's a side of him that very rarely comes out. He's a nice, generous person who won't hesitate to offer a helping hand to those in need. If a situation calls for him to be tactful and considerate, he knows to do that.

Due to that side of his personality, he's pretty well-known. As is his friend Takuto, but for very different reasons. Before he knew it, girls were all over him, and guys looked up to him as someone they could count on if they needed something. Unfortunately, his usual nonchalant, almost indifferent, attitude ruins that. As does the shenanigans he pulls with his friend Takuto. It all just kind of balances out in the end.

He's not a morning person at all, so when he's forced to wake up on his own, he usually has to rush to school to avoid being tardy. His mom often nags him about that, as she does with his other bad habits.

"Ehehe... There's just something I like about that face you make when you're eating something you love..."

Yuuka is quiet, carefree, and just an all-around sweet girl to be around. She's very kind, and enjoys things like cooking, among other household chores. Nothing makes her happier than spending time with Takeru, her childhood friend, and she's always looking out for his well-being

Apart from that, she can be described as warmhearted and a bit absentminded. You can see this is many things, but most notably how she makes up songs and sings them while she cooks. She's also somewhat of a klutz, and fundamentally bad at everything sports related. If the class breaks off into a run, it will take a second or two delay before she starts.

If Takeru tries to go somewhere, she'll get up and follow, only to trip and fall, prompting Takeru to swiftly catch her. Essentially, Yuuka is the kind of girl you can't help but want to protect. 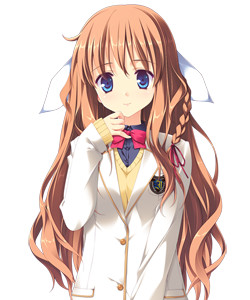 "B-Buzz off. Sometimes I just... have moments when I wanna be left alone, okay?"

Sumire is a classmate of Takeru, who is always acting cool and aloof (merely pretending, of course). She's part of Takeru's circle of friends, but feels a little more distant than the others.

She thinks what Takeru's doing is praise-worthy, but can't be honest about it. In fact, she'll act the exact opposite, insulting him and berating him for acting like "Mister Nice Guy". She can't ultimately suppress her desire to compliment him, though, and always tacks on a "That was nice of you" at the end.

You'll usually never see her acting feminine in any way, though that's more the result of her doing everything in her power to hide her feminine traits. Truthfully, she's a normal girl too, and she works hard day in and day out to make her crush, Takeru, happy. 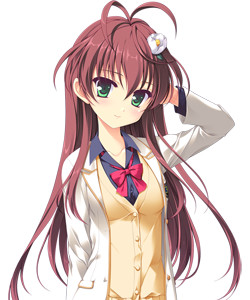 "I know you rushed over here to help, but still, no running in the hallways, please."

Misao is a very studious, well-mannered girl in her first year of high school, who speaks and acts politely around everyone. She is very considerate, which is why she'll often make tea for Takeru during Committee work.

She's an eager beaver who always buckles down when it comes time to doing Committee work, or study for classes. If there's anything she can't do well, she'll face it head-on. Even if it's hard, or she feels stumped, she'll motivate herself, and power through it.

She tends to be weak against peer pressure, and doesn't question things, in a way like losing to a majority vote. Though that isn't to say she can't state her opinions. She can, even to upperclassmen, she just might be a little shy about it.

She's the straight-lace type, who can't stand sexual jokes or comments... But maybe this girl is actually a closet pervert? 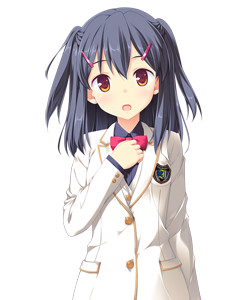 Natsuki is very introverted, and as a result, struggles to communicate and socialize with others. It's her first year in high school, and her classmates are a bit overprotective of her.

Being as soft-spoken as she is, it's no wonder that when she wants to convey a thought, she'll do it through actions instead of words, which may come across as a little childlike. She'll sometimes fail at expressing herself, but there's no cuter sight. She reminds you of an adorable, small animal. She's very quiet and docile by nature, always honest and never has any hidden intentions, which makes it very easy to read what's on her mind.

Takeru once saved her, so now as a result, she clings to him. Whenever she's with Takeru, or trying to get his attention, she always has the most precious smile imaginable on her face. You just can't help but want to make her happy seeing that. 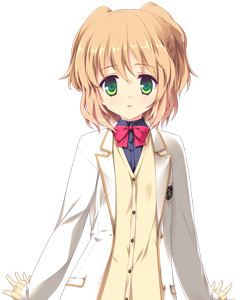 "Hmm? Something on your mind, Takeru-kun? My chest, is it? Having dirty thoughts now, are we?"

She's looked up to and adorned by both boys and girls alike, and not only she is she a borderline genius who can do pretty much anything, she's also a natural beauty who approaches and befriends people of her own accord, rather than the other way round.

All of that bestows her with somewhat of an idol status around school, though maybe the word diva is more fitting. She's anything but pure and virtuous.

She's capable of pretty much anything, but she has a short attention span, never sticking to one thing and never staying in one place for too long. The meaning of life to her, is to just have fun. Lately she's found herself interested in Takeru. His reactions are interesting and amusing to her. She enjoys teasing him in every way imaginable, including kinky things.

She's a big lover of small animals, and just cute things in general. 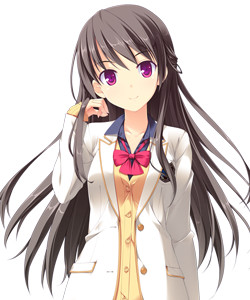 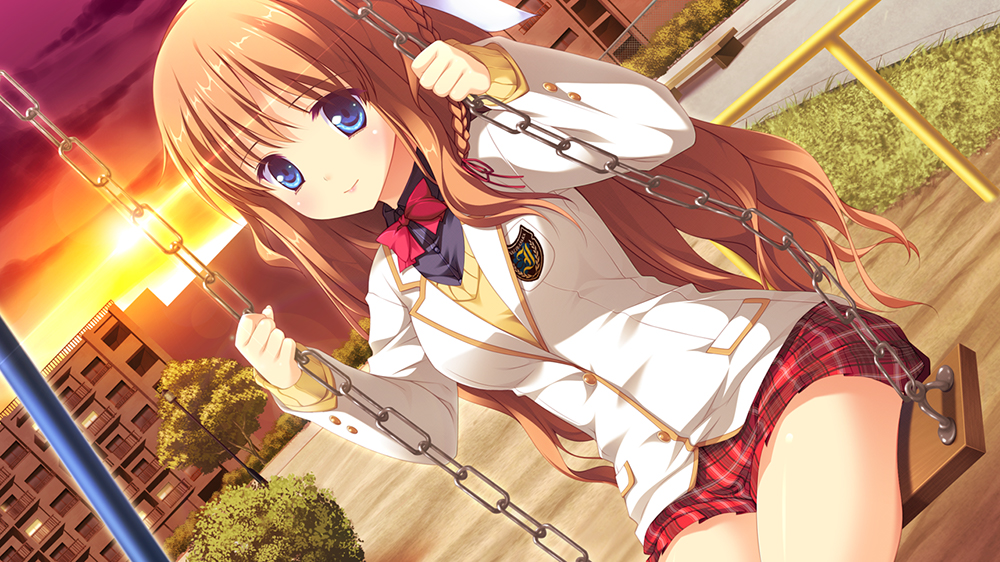 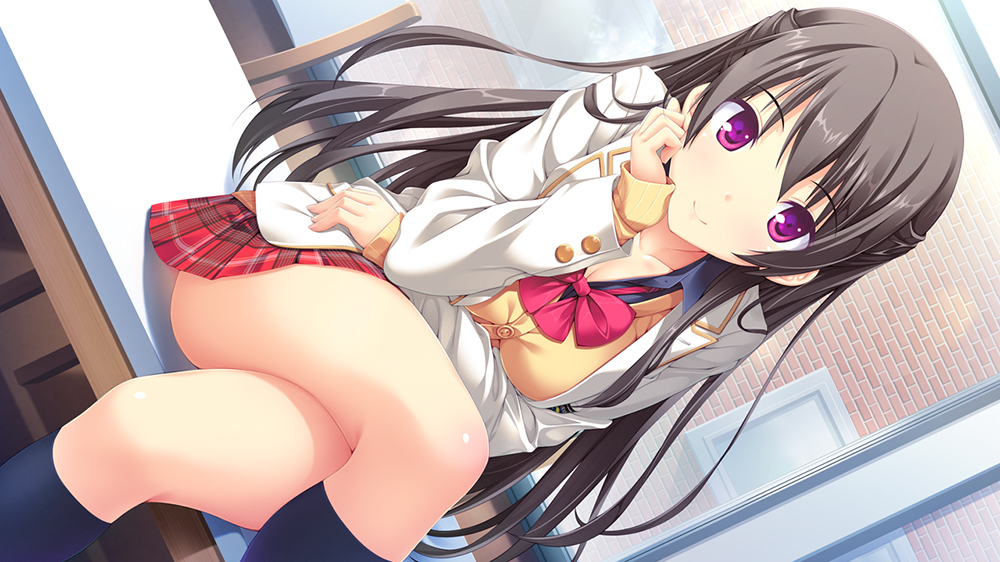 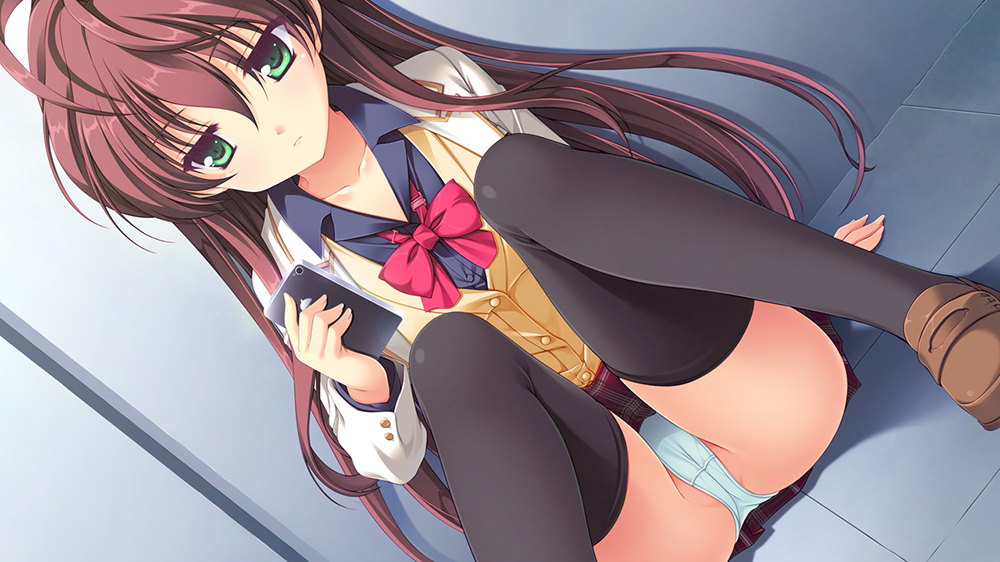 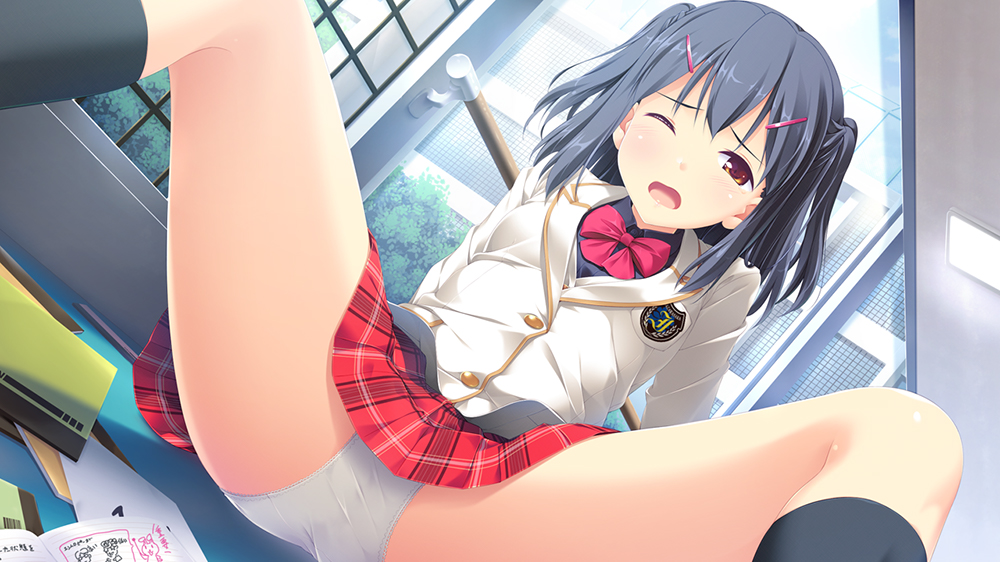 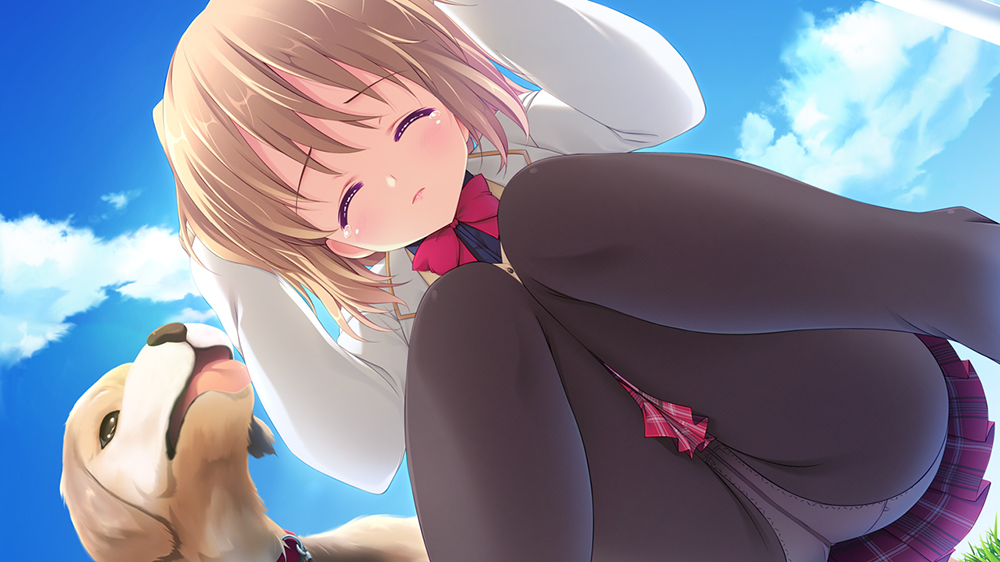 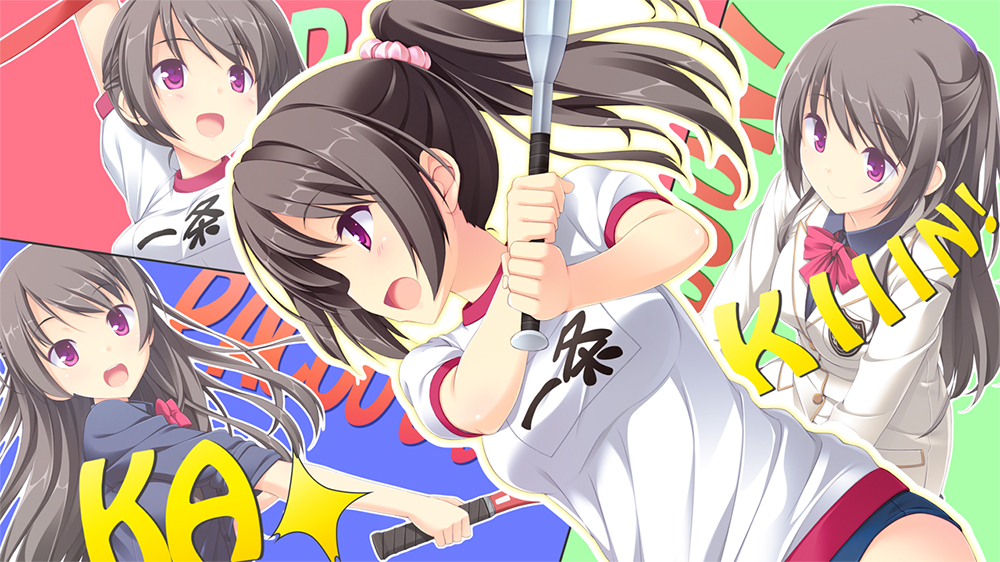 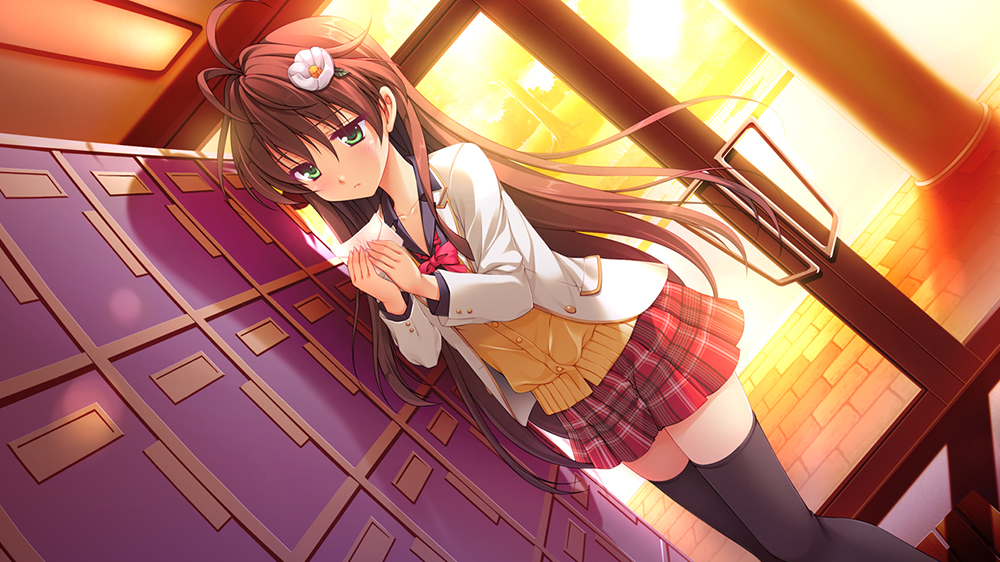 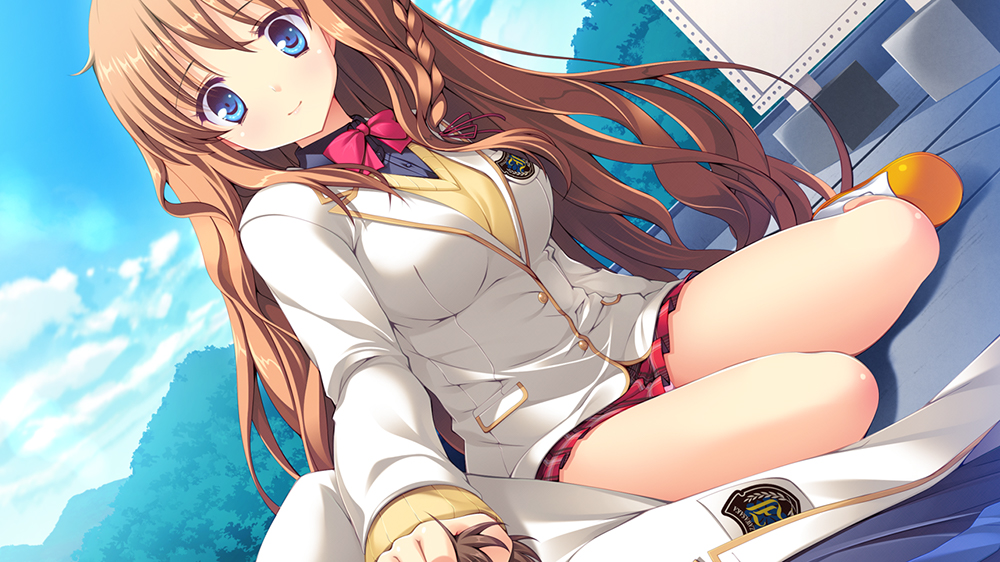 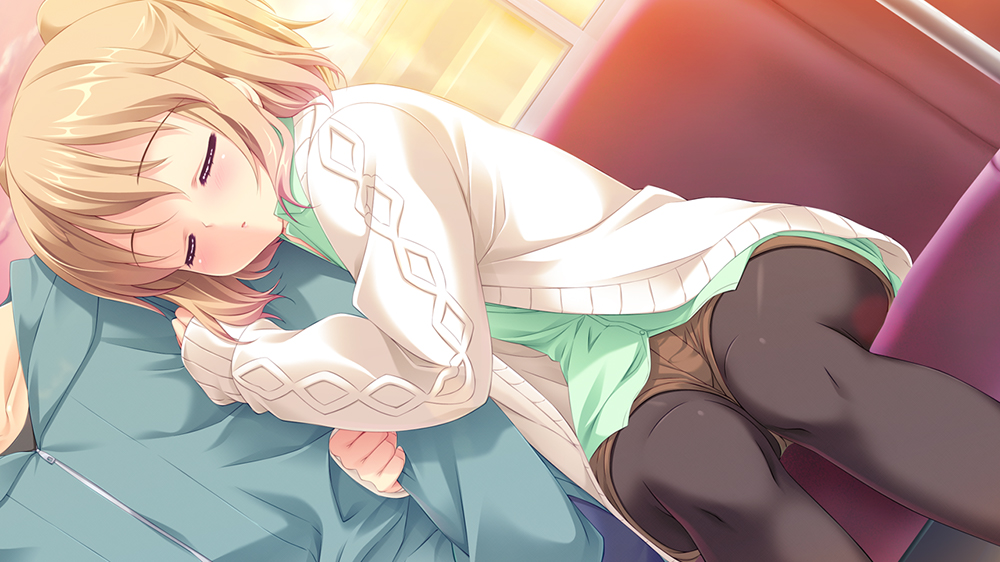 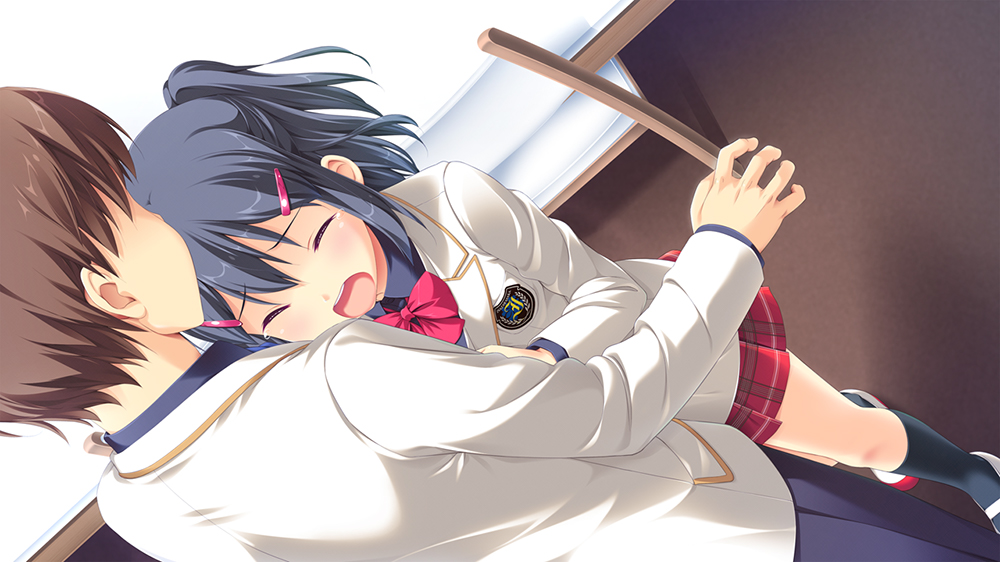 1. What versions of the game are going to be available?
A censored version is coming to Steam, and the x-rated version will be made available through our webstore and other platforms.

2. Uncensore Patch for Steam?
Yes. You'll be able to download the patch from our website for free.

3. Are H-CGs going to be mosaic-free?
There is nothing drawn under the mosaics, so nothing we can do in this regard.

5. Physical?
Undecided. Feel free to use our forums to tell us your opinion and we're going to discuss it with hooksoft.